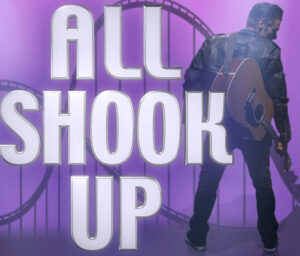 In collaboration with the Oregon Conservatory of Performing Arts (OCPA), Camelot Theatre presents the 2021 Conservatory students in  All Shook Up an American jukebox musical with music from the Elvis Presley songbook and characters and plot twists that were inspired by William Shakespeare’s Much Ado About Nothing, Twelfth Night, As You Like It and A Midsummer Night’s Dream.

It’s 1955, and into a square little town in a square little state rides a guitar-playing young man who changes everything and everyone he meets. This hip-swiveling, lip-curling musical fantasy will have you jumpin’ out of your blue suede shoes with such classics as “Heartbreak Hotel,” “Hound Dog,” “Jailhouse Rock,” and “Don’t Be Cruel.”

Support the “Next Generation of Theatre Artists” and enjoy this lively musical.

Katelyn Adams- Ensemble
This is Katie's first time performing with Camelot/OCPA. She acted in her school's musical production of Honk Jr. in the Spring of 2021. Katie enjoys songwriting, horseback riding, and fashion. She can play multiple instruments; such as guitar, ukulele, and piano. She was a bassist in her school's band in her sixth grade year. She's always had a love for performing, even if it gets overwhelming at times.

Andre Alcocer-Ensemble
Andre is a Person that likes to act, sing, draw, dance, and cook he loves theater and when he's not acting or on stage he’s drawing or cooking when he's on stage he tries his best at what he's doing and has fun, he is hard working and loves doing theater, he has also worked on another show called Annie Jr. in Kids Unlimited Academy. He wants to thank his dog Moises for practicing scenes with him.

Bjorn Austbo- Dean Hyde
Bjørn will be looking forward to his third production at Camelot Conservatory. The last production he did at Camelot theater was Pirates of Penzance. Bjørn also sang and danced in several talent shows. He loves cross-country, downhill skiing, Telemark skiing, and cross-country skiing. He has won many gold medals across his vast amounts of sports. Next year he will be looking forward to 9th grade in his first year at Ashland high school.

Kariana Austbo- Mayor Matilda Hyde
This is Kariana's 9th year with the Camelot conservatory. Her credits include: Legally Blonde, Aida, Natalie Oakley in Annie Get Your Gun, Coricopat in Cats, Jemima Potts in Chitty Chitty Bang Bang, Veruca Salt in Charlie and the Chocolate Factory, and Mabel in Pirates of Penzance. Kari has had vocal and ballet lessons. She sings professionally for weddings. She is also a varsity ski racer and runner at Ashland High School.

Tyler Bailey- Jim Haller
Tyler has been in many shows around the rogue valley. He likes to sing and act. Other than theatre, He like to take walks around town and hang with his friends and family. His goal is to make it to Broadway and be well known throughout the acting community. You will hopefully be seeing the name Tyler Bailey again on other popular plays and maybe the news.

Aria Bracelin- Henrietta
Aria is very excited, yet nervous to be preforming in All Shook Up!
Aria has also been seen in Fumbled Fables done by the YMCA as the main narrator. In Aria’s free time she likes to read books and hang out with her friends.

Jackson Deal- Dennis
This is Jackson’s forth performance with Camelot Theatre, other shows include Oliver!, Billy Elliot, and Peter Pan. He has also participated in other Oregon Conservatory of Performing Arts
Summer Camps performing in The Wright Brothers, Oliver Twist, and We Hazz Jazz. Jackson has started playing the clarinet, and has his 1st degree Black Belt at Chip Wright’s Champion Karate.

Julian Estrada- Chad
Julian has always thought of acting for a while and when he finally got the opportunity to be in his first little school play he was thrilled and started doing theater work ever since. He is excited to be a part of All Shook Up. Some other shows He has been in include The Heights playing the role of Sonny and Annie playing the role of Daddy Warbucks. Outside of theater Julian is always writing music.

Izzy Fichera- Ensemble
Izzy’s previous credits include Once (Oregon Cabaret), Peter Pan, Billy Elliot, and Pirates of Penzance (Camelot), A Christmas Carol, Pippin and Nightmare Chamber (Randall), From the Dark (Siskiyou Productions), and the web series Nate & Laura, Time Sick, and Cody’s Tempest. She has also appeared in Do Not Open Forever, Dead in Her Bed, The Wizard of Whittlewood, and Darker Seuss (Randall Youth).

Jes Joranco- Lorraine
Jessica Muhlenkamp-Joranco is thrilled to be Lorraine in Camelot/OCPA’s All Shook Up production. She has been in Ashland's Children theater. As well as many productions in California. She was also Elsa in Frozen Jr. When she's not on stage her favorite thing to do is dance and spend time with family and friends.

Mayli Magda- Ensemble
Mayli is 13 and passionate for acting. She has been challenged with Camelot Theatre more than previous plays. Mayli has been in a play each year from 2nd - 7th grade and has had roles like the Cowardly Lion in The Wizard of Oz and the wife of Zeus in The Odyssey. She is very grateful for the opportunity to perform at Camelot Theatre and hopes to be in other professional plays with larger roles.

Mila Robertson- Natalie Haller
Mila is thrilled to be performing All Shook Up as her first show with Camelot/OCPA. Mila has also been in three shows at Ashland High School. You may have seen her as Yvette in AHS’s stay-at-home production of Clue: The Musical, Little Sally in Urinetown, or Pugsley Addams in The Addams Family. When Mila is not doing theatre, she loves to go on road trips with her family and hangout with her friends.

Maja Stachurska Paschal- Miss Sandra
All Shook Up is Maja’s first production with Camelot Theater and she couldn’t be more excited. She has done three shows with Siskiyou School, her favorite role being Tatania in A Midsummer Nights Dream. Maja enjoys writing, hanging out with friends, and exploring new places in her free time.

Ian Tringolo- Ensemble
This is Ian’s first production with Camelot/OCPA. Even though he hasn’t done a production before he is confident that he can help put on a good show! Some of his hobbies include performing random skits in front of his family and listening to musicals. He is very excited for this performance and believes that together the cast can make it come together into a very beautiful show!

Dominick Velasco- Ensemble
This is Dominick’s first time in Camelot’s Conservatory. He is a student at Kids Unlimited Academy. Previous shows he has been in are Annie Jr. and Murder at the Pie Auction. He would like to thank his cat, Tobi.

Jaiden Wilson- Sheriff Earl
Jaiden, or Jay for short (or Jaid for medium) has worked previously in productions with the Randall Theatre and Nightmare Chamber, and is excited for his first musical role at Camelot/OCPA portraying Sheriff Earl, the law of the town. In his free time he likes to make digital art, write bad jazz, be moderately tall and hang out with his five cats.