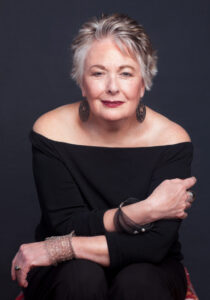 Rogue Lives is a series of presentations that features the lives and stories from the people of the Rogue Valley. Our valley is populated by people with rich histories, extraordinary life events, and every kind of talent imaginable.

Jane Ballback hosts these events filmed before a live audience at Camelot Theatre for future broadcast on Southern Oregon PBS.

Each presentation will provide an opportunity for the audience to hear fascinating stories from local individuals - experts in the topic fields. There will also be a chance for interaction between the guests and the audience.

Tony Heald - Born to Be an Actor

Tony Heald has acting in his blood going to be all the way back to several generations. His parents started a community theater in their hometown and his mother spent a great deal of time in New York with people in all walks of life who worked in the New York theater scene. In his early life he thought he would be a journalist and he did finish a degree in journalism. But as the fates would have it, in high school he and a friend began to perform in their own two men plays and garnered much attention and enthusiasm.

At Michigan State Tony was cast in a play and began acting in summer stock. After a not so successful experience that summer, he began to doubt his decision until his mother said, “you are an actor!” He can trace his connection to Shakespeare from his ancestors the Hurds who founded the town where the Stratford Theater now resides.

Tony has been on Broadway seven times and has been nominated for a Tony award twice for his roles in “Love! Valor! Compassion!” and in “Anything Goes.” He also has performed in off-Broadway, Regional theaters, and happily for all of us he has been in the Oregon Shakespeare Festival 11 times, often times playing multiple roles.

When I asked what had made him most famous there was only one answer, “The Silence of the Lambs.” In his presentation he will entertain you with how he obtained the role and what it was like to work with Sir Anthony Hopkins.

Michele Mais - From Ballet and Butterflies to Broadway

Michele Mais’s career started when she was just five years old performing in a dance recital. She was a butterfly and she was so entranced by being under the stage lights and by the applause from the audience that she was reluctant to leave the stage. She was the last butterfly to leave so she left as slowly as her wings would take her.

Maisey has spent most of her career on the stage. She has been on Broadway, off-Broadway, toured internationally, and performed in regional theaters all over the United States. Happily, she has been at the Oregon Shakespeare Festival for six years and will be there again this year.

When she was 17 years old, with no experience no sheet music, no pictures, and no resume she walked into an open call audition for “Godspell.” She got the part! That is when she learned that she would not put limitations on herself but be as spontaneous, uninhibited and fearless as she could be.

She often worked in New York and Los Angeles when she wasn’t touring. One of the most impactful plays she performed in was, “The Last Session,” a play about AIDS. The cause is very close to Maisey’s heart as she had lost many friends to this disease. She received the Drama Critics Circle Award for her performance.

One of Maisey’s idols was Georgia Brown, famous for singing and acting on stage and television. Maisey got to work with Georgia on “Roza.” In addition to being an actor, Maisey has the ability to look at a play and see what is missing or what could be done differently. She created her own role in Rock of Ages and performed the role for many years.

Maisey has been in a wide range of plays and shows. She was the lead singer in Dick Clark’s American Bandstand and fulfilled one of her goals to see her name on a billboard.

She also worked with Hal Prince in a place called, “Roza “at the Royale theater in New York. The play did not have a long run but Maisey was honored with a “Hirschfield,” for her performance. Maisey is attracted to a play, not because she thinks it will be phenomenally successful, but rather because she believes in letting her heart and her sense of fun draw her into doing the work.

An actor’s life is very affected by the critical reviews. After a critical review of “Zoot Suit,” Maisey and the entire cast found it very hard to go on stage and try to win the audience’s approval and applause. Alan Alda happened to be in the audience and he came backstage to encourage what he considered to be outstanding performances. The cast went on with the show with a renewed purpose and vigor.

Although many times her parts allow her to sing, she is also very capable of doing dramatic parts. Cast in a dramatic play in which she had to learn many pages of difficult dialogue, she once again improvised onstage and she sang a lullaby to a dying child. She had hoped that she would be remembered for dramatic acting, but no one could stop talking about the lullaby.

This will be her seventh season with the Oregon Shakespeare Festival. Bill Rauch called her while he was in New York six years ago and he invited her to come to Ashland and perform. We are so lucky to have her and know without a doubt that whatever happens on stage you will notice Maisey and be entranced by her performance.

I am hoping to hear a little bit of Maisy’s incredible singing voice as we hear about her life as an actor.

An actors’ actor is defined as someone whose work is consistently excellent without being showy and whose work is suffused with the kind of detail and specificity that trained, experienced actors recognize as talented. That is the very definition of Doug Rowe who has been an actor, producer, director and artistic director of two theaters. His first love is acting.

He was on his way to Notre Dame with a baseball scholarship, when he decided to go to a smaller school, took a speech class, and was “found,” by the drama teacher. Acting was more fun than baseball. He has acted in every possible medium, on Broadway, off-Broadway, in movies, on television and because we are lucky, he has been in many productions at the Oregon Shakespeare Festival.

He lost a bid to stardom when he was asked to play Brutus in Julius Caesar on Broadway and the production didn’t happen because the star, Richard Dreyfuss had been offered a movie role. The life of an actor has many ups and downs and he has been masterful in riding the waves of an actor’s life. He is most of all very grounded, and very happy whatever part he is playing.

He feels like his best part was Willie Loman in “Death of a Salesman,” staged here at the Oregon Shakespeare Festival. He felt like he was born to play this part. It also was the part that brought him from Southern California. The author of “the Death of a Salesman,” oftentimes says it’s the only play that makes men cry. Doug’s experience is that not only did men cry, so did the young boys in the audience, who related to the two sons in the play.

His 30 years at Laguna Playhouse was very eventful in several ways. He increased the audience attendance to 8000 season ticket holders and raised money to build a new theater which he helped design. In most years the Laguna Playhouse was chosen as having the top plays by the Los Angeles Times.

For everyone old enough to remember M*A*S*H, the TV show with the most-watched finale, do you remember the episode where the helicopter pilot and BJ Honeycutt need to rescue Hawkeye and Hot Lips? Doug was that helicopter pilot.

Doug helped launch many careers. This happened with an actor named Harry. Harry’s agent called Doug and said that Harry was disheartened by the attempt to be an actor. He asked Doug if Harry could read for him. Doug said sure and was very impressed with the reading and cast Harry in a play. Universal Pictures came to see the play and Harry only did one play, because Harry is Harrison Ford, and I’m sure you all know the rest of the story.

The Laguna Playhouse is also where Doug met his wife Catherine and they have been married for nearly 40 years. One son is an assistant director on a TV series, and the other son coaches baseball. Both of Doug’s passions carry on.

You will get to hear these stories and many more at the event. He’s going to tell you about his life as an actor, he is also going to sing, and do a short version of a role he loves to play.