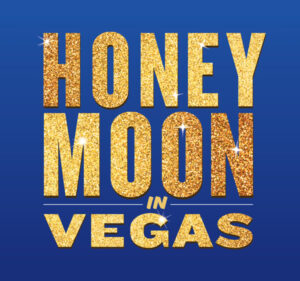 A romantic romp from New York to Vegas to Hawaii, this musical about saying "I Do" is non-stop, laugh-out-loud fun!

Based on the hit 1992 film, Honeymoon in Vegas is a hilarious new musical that centers on an unusual love triangle, featuring a wonderful new score by Tony-winning composer, Jason Robert Brown.

Mild-mannered Brooklynite, Jack, promised his dying mother that he would never get married, but that was before he met his sweet and beautiful girlfriend, Betsy. Haunted by a fear of Mom's retribution, Jack avoids proposing but, when he finally summons the nerve to whisk oh-so-patient Betsy off to Las Vegas to get hitched, a dashing gambler named Tommy threatens to sweep his fiancée away to a life of luxury in Hawaii. Realizing what he's about to lose, Jack is determined to do anything to give his love story a happy ending. It all adds up to an action-packed honeymoon that no one will ever forget!

Fast, funny, and irresistible, this show is filled to the brim with unforgettable songs and characters! Bet the house on this over-the-top spectacle featuring skydiving Elvises, sexy chorus girls, red-hot romance, and really cold feet!