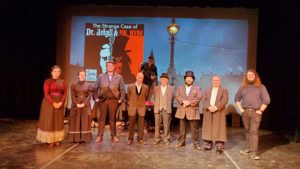 Camelot Theatre, in association with Jefferson Public Radio, will be presenting a series of three audio dramas in 2022. Each one will be presented in three performances in front of a live audience, with each one being recorded and later aired on JPR. Each audio drama will also be released as a podcast.

Camelot Theatre produced an audio drama adaptation of The Curious Case of Dr. Jekyll and Mr. Hyde (right) in the fall of 2021 to critical acclaim. This year's audio dramas are: 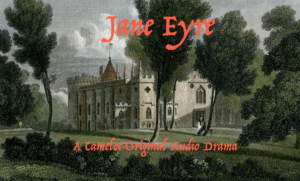 Based off the famous 1847 novel by Charlotte Bronte, this new adaptation brings the classic story of love and forgiveness alive. Orphan Jane Eyre is sent by her unscrupulous aunt to live at the Lowood Institution for Girls to train to become a governess. She is horribly mistreated during her time there and survives a typhus epidemic to finally win her freedom and become a governess. She then takes a job at Thornfield Manor where the house, her charge, and even the owner is shrouded in mystery. A strange presence is about the house and Jane is forbidden to investigate. Despite her strange surroundings, she starts falling for the mysterious owner, Mr. Rochester, which may be her greatest mistake yet... 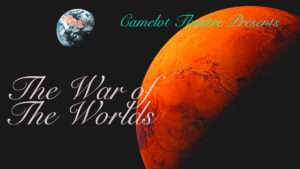 War of the Worlds

In this new adaptation of H. G. Wells’ classic science fiction invasion story, the war for humanity is brought to life in this thrilling production! As the British Empire stands at its greatest height, an enemy no one would have believed falls from the sky: the Martians. Fleeing Mars, which they have used up and destroyed over centuries of waste and destruction, the Martians turn to our fair planet for survival. Georgette Herbert, a newspaper reporter from the small town of Woking in Surrey, must survive after a Martian cylinder lands near her home and quickly destroys all resistance the humans are able to put up. She wanders the wastelands of England, hoping there may one day be a way to stop these terrible invaders from
destroying her home. 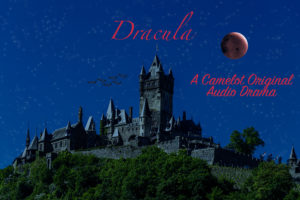 One of the original vampire novels jumps off the page in this new adaptation of Bram Stoker's seminal novel Dracula. After living in seclusion for centuries, the villainous Count Dracula sets his sights on Victorian England. After tricking innocent lawyer Jonathan Harker into purchasing an abandoned monastery for him, Dracula wreaks havoc on the inhabitants surrounding the property. When Lucy Westenra falls ill, Dr. Seward calls upon his former teacher Abraham Van Helsing for help who realizes that Dracula is a vampire. Our heroes must stop this creature of hell before he takes over all of England and then the world!