BAREFOOT IN THE PARK 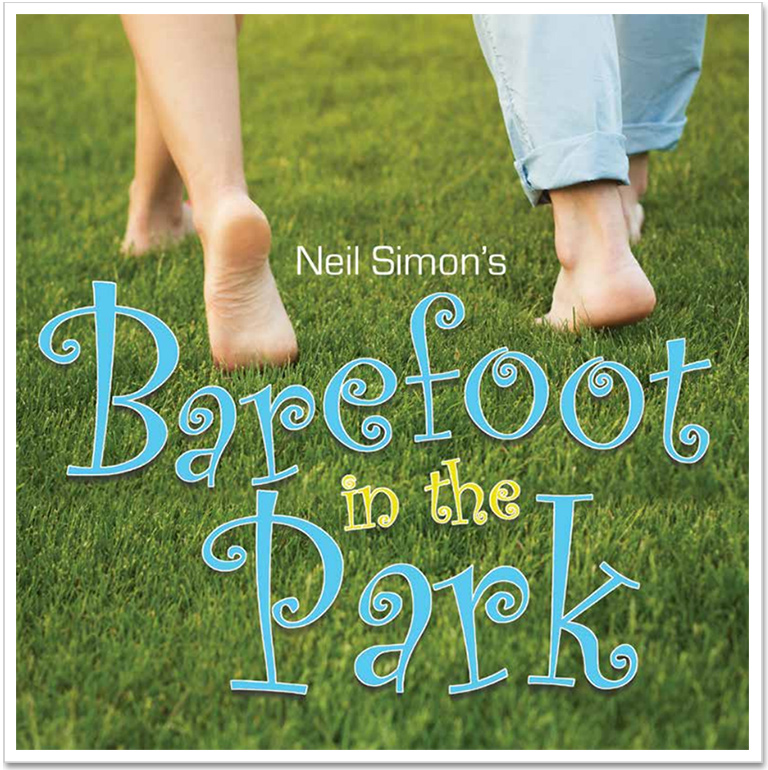 This well-loved romantic comedy was Neil Simon's longest-running hit, and the tenth longest-running non-musical play in Broadway history. Love is in the air, only five flights up, when a free-spirited bride (Corie) and her buttoned-down, lawyer groom (Paul) settle down to some rocky happily-ever-aftering in their newly found Greenwich Village walk-up, complete with bad plumbing and in desperate need of a paint job. After a six-day honeymoon, they get a surprise visit from Corie's loopy mother and decide to play matchmaker during a dinner with their neighbor-in-the-attic (Velasco), where everything that can go wrong, does. Corie and Paul put the "new" in "newlywed" however, and soon discover that while opposites attract, it often takes a little compromise to get to "happily ever after"; even if it means walking barefoot in the park.

Neil Simon’s “Barefoot in the Park” is the classic romantic comedy about freshly minted, button-down-type lawyer, Paul, and his free-spirited, flower-child wife, Corie. The couple have just returned from a weeklong honeymoon and begin to set up housekeeping in a somewhat battered fifth-floor walk-up when the differences in their personalities come to light. The sticky spots in their relationship are further confused by the quirky and entertaining characters around them.

“Barefoot in the Park” opened in 1963 on Broadway, starring Robert Redford as its leading man opposite Elizabeth Ashley as the high-spirited Corie. The play was an immediate success and ran for more than 1,500 performances before closing in 1967, making it Neil Simon’s longest running hit. The New York Times called it “bubbling, rib-tickling comedy.”

BY  JEFFREY GILLESPIE FOR THE TIDINGS May 03, 2018
Camelot Theater Company is staging “Barefoot in the Park,” the Neil Simon classic about newlyweds Corie and Paul Bratter and their adventures living in a tiny apartment together during the early days of their marriage in Manhattan’s Greenwich Village. Adam Kilgore and Jess Mengel — two brand new actors in the Camelot firmament — will star in their debut performance with the company.

Simon, who is 90 years old at this writing and continues to reign as one of the crown princes of Broadway, wrote the original script for “Barefoot in the Park” which premiered on the Great White Way in 1963 at the old Biltmore Theatre. He considered the play to be “light, fluffy entertainment ... where nothing is really at stake,” unlike “Prisoner of Second Avenue” and “The Sunshine Boys,” which were both comedies but which Simon thought of as primarily bittersweet black comedic devices with deeper themes.