The 2022 CONSERVATORY IS BETTER THAN EVER - AND IN-PERSON AGAIN! 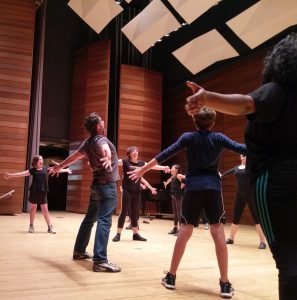 We are proud to be partnering and collaborating with Oregon Conservatory of Performing Arts (OCPA). OCPA is the longest-running educational theatre program for youth in the Rogue Valley. Started in 1998, it offers accredited training courses for students ages 6-12.  The  Conservatory program, is now offering theatrical training for students 7 - 19-years-old

By uniting our programs, we offer accredited comprehensive training in stage and theatre, year-round, by  distinguished faculty consisting of professional drama educators, community and professional actors and theatre professionals.

Students will gain training in theatre history, play writing, acting, musical theatre, dance stage presence, voice, singing and auditioning. This is a program that teaches the comprehensive craft of theatre. Students will be accredited by OCPA for successful mastery of courses, for audition and higher education credentialing.  Past students have continued on to college, earning scholarships, and started careers in professional theatre companies with the strong foundation gained in our programs.

Andrew Brock - has been a music educator in the Rogue Valley for the past 24 years, where he has taught elementary music. directed middle and high school choirs and college level courses. Andrew completed Master's Degrees in Voice and Music Education from the University of Oregon in 2005, and earned his Initial Administrator’s License from Southern Oregon University in 2011. As a tenor, he has performed with Eugene Opera, Eugene Symphony, Oregon Bach Festival (Eugene), University of Oregon Opera Ensemble, Obsidian Opera (Bend) and Aspen Music Festival. Local performances include appearances with Rogue Opera (now Opera Brava), Rogue Valley Chorale, Camelot Theatre, Cooperative Theatre Project, and Siskiyou Singers. In addition to directing for Oregon Conservatory for Performing Arts for the past 10 years, Andrew was on staff at Southern Oregon University, where he taught voice and Class Lessons in Voice. Andrew currently teaches elementary music in the Phoenix-Talent School District.

Dennis Foster - Co-founder, Director of Instruction, and President of the Oregon Conservatory of Performing Arts (OCPA), also founded and directed the Eagle Institute of Performing Arts and several small theatre companies. He has a bachelor’s degree in education from Portland State University, with master’s coursework in theatre production at Central Washington University. He has 30 years of experience in theatre as an instructor, director, producer, and actor. He lives in Hillsboro, OR, where he continues to teach acting and musical theatre to youth and adults both in classes and privately.