A GENTLEMAN'S GUIDE TO LOVE AND MURDER 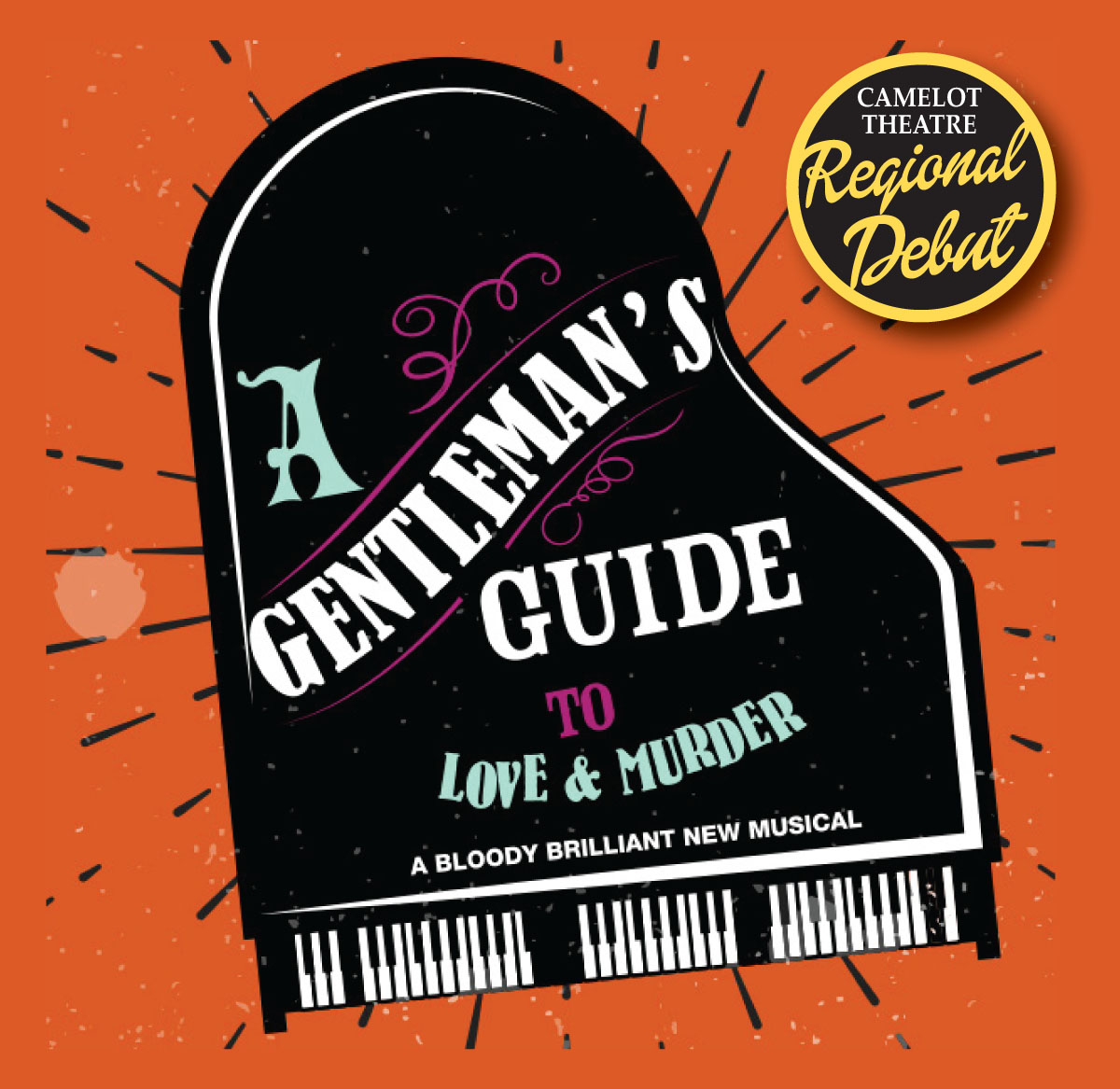 Set in London in 1909, A Gentleman’s Guide to Love and Murder tells the uproarious, farcical story of Monty Navarro, an heir to a family fortune who sets out to jump the line of succession by—you guessed it—eliminating the eight pesky relatives who stand in his way. You see, the family disinherited Monty’s mother, so, in revenge, Monty plots to eliminate the heirs, one by one – and they’re all played by the same actor! All the while, Monty has to juggle his mistress (she’s after more than just love), his fiancée (she’s his cousin but who’s keeping track?), and the constant threat of landing behind bars! Complete with an unforgettable score including the songs “I Don’t Understand the Poor”, “I’ve Got Poison in my Pocket”, It’s Better with a Man”, and “I’ve Decided to Marry You”. A Gentleman’s Guide explores the consequences of lust and ambition in a show that is certain to have you dying with laughter.It’s killer entertainment!

This serial killer's got charm of a puppy

Only the best British comics typically are best suited to deliver an Edwardian operatic farce -- that British sensibility is impeccably correct with an understated, often bawdy humor. You might think that is the case, at least until you see Cody Pettit and Paul Cosca tout their talents in Camelot Theatre's "A Gentlemen’s Guide to Love & Murder."

A young man discovers he is born to gentry, but is eighth in the D'Ysquith line to inherit. With all the native charm of a puppy and the beady eyes of a snake, Monty Navarro kills off those ahead of him in the line of succession and plays with the affections of two lovely young women who are determined to ensnare the heir. Yes, he's a serial killer, but ever so charming.

This Broadway show by Robert L. Freedman and Steven Lutvak won a well-deserved Tony in 2014 for Best Musical. Based on a 1907 novel by Roy Horniman, “Israel Rank: The Autobiography of a Criminal,” the work was also the basis for a 1949 film and 2004 theater production, “Kind Hearts and Coronets.” Of the three titles, “A Gentlemen’s Guide to Love & Murder” seems most descriptive and appropriate.

Cody Pettit is cast as Monty Navarro and is a delightful surprise in the role. Pettit is usually self-contained and matter-of-fact, but he lets loose a wacky and funny controlled brand of comedy that is totally unexpected as Navarro. Navarro’s lines are often lengthy, deliberately rushed because of the scene, and complicated, but Pettit never drops a word or loses his place.

The D’Ysquith family is too numerous and too confusing to name: There’s several Asquiths, an Adalbert and a Henry, Hyacinth, Eugenia and Ezekiel. It’s a challenge keeping them all straight, but luckily the D’Ysquiths are mostly all played by Paul Cosca, who is hilariously inventive. Cosca assumes each character as naturally as he adjusts his voice, comportment and gait, and changes his costume and wig.

“A Gentleman’s Guide” is set in the Edwardian era, a period of conspicuous wealth and extravagant lifestyles, while the poor and middle class were increasingly dissatisfied with their lot.

It’s the right setting for a Gilbert and Sullivan operetta, with its players gripped with the idea of climbing the social and economic ladder combined with lots of humor and surprises along the way.

Two ladies in big hats with big voices and bigger appetites grace the Camelot stage — Sibella played by Melanie Marie and Lauren Panter in the role of Phoebe. Marie has Sibella’s platinum blonde, whiny ways with a faintly nasal delivery, and Panter’s lusty, determined intent lets loose as deafening operatic desire. Their class-appropriate manners are showcased by their not-so-subtle competition for the man of their dreams, or at least their pocketbooks.

Costume designer Darby McCue assisted by Emily Sullivan deserve high praise for their stunning work. Each member of the cast, leads and ensemble were impeccably dressed in period costumes that were works of art. The women especially showed the signature fashion statements of the Edwardian era: two-piece dresses with tight corsets and long flowing skirts. Those big hats again, sitting just so on a mass of curls, gloves to suit the time of day and dress, and parasols spinning.

Todd Nielsen directs and choreographs “A Gentleman’s Guide to Love & Murder” and is no stranger to musical theater and the extravagant production. Last year he directed “Million Dollar Quartet” at the Oregon Cabaret Theatre to high acclaim. Nielsen’s sense of fun and his love of the extravagant Gilbert and Sullivan musical style is evident in the production and in the acting of each member of the ensemble.

“Really what was the most fun was that somebody would do something absolutely ridiculous and they’d say ‘we can’t do that’ and I’d say, ‘yes we can!’” Nielsen said of Camelot rehearsals. “For the most part, the ensemble created their own characters based on British sketch comedy; so you go a little ridiculous but you stay in truth.”

Set design is notable, with three areas defined for action and a clever use of projection. The cast uses the aisles and front of stage to advance the plot and add texture to the production. Conflict and ensemble scenes occur on the stage itself, and there are plenty of these. Off to the side, Cody Pettit as Navarro attends to his diary, his thoughts and writings echoing in the hall, savoring each scheme as it unfolds. But watch the raised dais toward the back of the stage, because when those red velvet curtains go up they signal another murder, another oh-so-tidy denouement.

“A Gentleman’s Guide to Love & Murder” runs about two hours and continues in the Camelot Theatre through March 17. The production uses the sound of gunshots as special effects. Tickets run $25-$38. For more information, see CamelotTheatre.org or call the box office at 541-535-5250.

I have often been accused of having a sick sense of humor. Usually by my older son, whose twisted comedic sensibilities make my own seem very bland by comparison. Nevertheless, there are times when I admit I prefer to respond to darker matters, such as revenge and murder, with a leavening of laughter.

Imagine, if you will, a Count of Monte Cristo revenge tragedy, updated to the turn of the 20th century and injected not only with humor, but with rollicking Broadway musical numbers as well, and you have the premise of Camelot Theatre’s current production, A Gentleman’s Guide to Love and Murder. First performed on Broadway in 2014, the show garnered many awards for writers Robert L. Freeman and Steven Lutvak, who adapted the stage play from a novel by Roy Horniman.

Director and choreographer Todd Nielson has chosen a universally talented and consistent cast, all of whom sing, dance and act on a satisfyingly professional level. With backing from the Camelot Orchestra, conducted by Don Hopkinson, Jr., this production is thoroughly entertaining throughout.

The story starts right after the funeral of the protagonist’s mother, when Monty, played with winsome amorality by Cody Pettit, receives a visit from his old nurse, Miss Shingle, brilliantly portrayed by Catherine Hansen. Miss Shingle offers Monty proof that he is not only a member of the very wealthy D’Ysquith family, but also seventh in line to become the next Earl of Highhurst.

Monty can’t wait to share his good news with Sibella, the love of his life, played with convincing shallowness by the beautiful Melanie Marie. Desperate to prevent Sibella’s marriage to a wealthy rival, Monty turns to his newly-discovered family for financial help.

Convincingly portraying vir-tually every remaining member of the D’Ysquith family, Paul Cosca commands the stage, mugging and vamping in turn in such musical numbers as “I Don’t Understand the Poor,” “Lady Hyacinth Abroad,” and “Better with a Man.”

After Monty’s overtures are rejected in much the same way his mother’s family rejected his mother, fate steps in and offers Monty an opportunity not only to avenge her, but also to move closer to the earldom. As the story unfolds, we are introduced to Monty’s cousin Phoebe, played with elegance and vulnerability by Lauren Panter.