PRISCILLA QUEEN OF THE DESERT 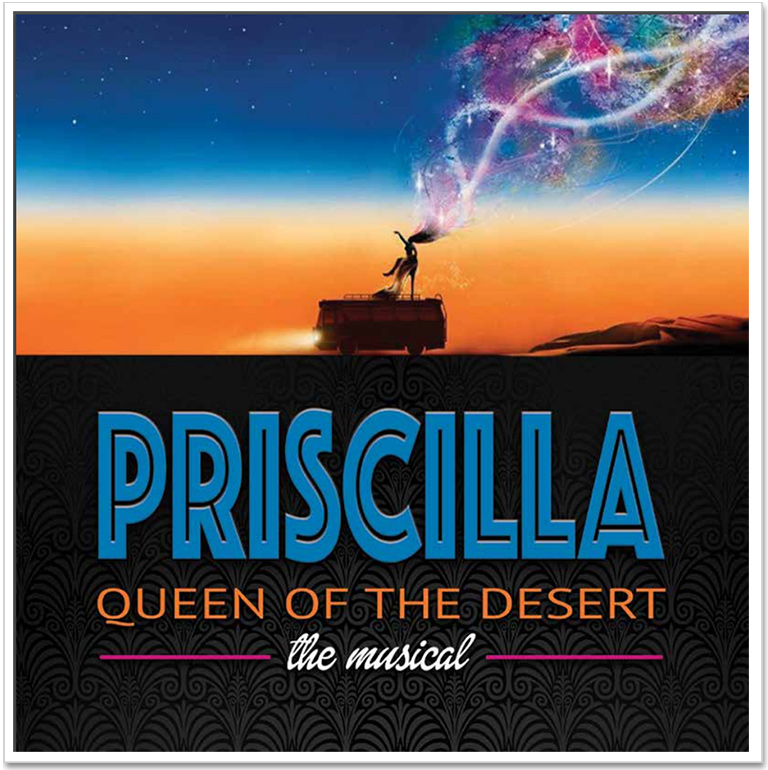 Based on the Oscar-winning film The Adventures of Priscilla Queen of the Desert, this Tony Award winning musical follows the adventures of a trio of drag queens who journey across the Australian Outback. When Tick's ex-wife is in need of an act at her far-away resort, he recruits his fellow queens to make the journey across the desert aboard a battered old bus, nicknamed Priscilla. On their search for love and friendship, the trio realize that even in a world that is not always kind, they may still end up finding more than they ever could have ever dreamed of. With a dazzling array of outrageous costumes and a hit parade of songs including "It's Raining Men," "I Will Survive," "Hot Stuff," "Boogie Wonderland," "Go West," "Girls Just Wanna Have Fun," and "I Love the Nightlife," this wildly fresh and funny musical is a journey to the heart of FABULOUS!

Priscilla’ is jaw-dropping and fun

BY MAUREEN FLANAGAN BATTISTELLA FOR THE MAIL TRIBUNE July 13, 2018

“Priscilla — Queen of the Desert” is an extravagant pageant of love, life and unrestrained jubilation with lots of ’80s music, incredible costumes, killer choreography and vocal talent, a live orchestra and a huge bus on the stage.

“Priscilla” opened this week at the Camelot Theatre in Talent to a full house, and the crowd seemed ready for everything. As one audience member commented, “With drag, anything goes.”

Three drag queens drive a bus through the Australian desert to a casino that has booked their act. If you’re a fan of “The Rocky Horror Picture Show,” you might guess what’s coming. And if you love the glittering pop culture of the 1980s and the era’s muscular music or just want to see a spectacular theatrical production, “Priscilla — Queen of the Desert” is right up your alley.

The drag queens are played by Zachary Horn, Evan Sheets and Scott Ford. Horn is Tick, and Mitzi when in drag, showcasing many of the vocal roles that Tick carries and is exceptional. Sheets has the role of Adam when he is a man, and Felicia when he is in drag, and Scott Ford is Bernadette, who’s made his choice of gender surgically complete. As the three become closer during the journey, there’s bickering and tenderness that touch the heart, expressed through the choice of music and performance.

Sheets stands out as Adam and Felicia. He has a mad, manic vitality and his narrow body is transformed in drag, becoming weird, wonderful and mythic, comically too tall for the height of the bus, and the vertical height of the stage. Sheets writhes, gyres and gimbles in the waves of pop music that are compelling, hypnotic and hysterical.

Some “Priscilla” productions are lip-synced because it can be hard to find talent who can act as well as sing. Not at Camelot. Except for Sheets’ hyperbolic operatic rendition of “Sempre Libera” from the top of the bus, Camelot’s actors largely carried the sets.

The three divas are Courtney Crawford, Kelly Jean Hammond and Grace Peets. Their costumes and tall wigs are superb and so are their voices, serving as lead and background and often center stage. Peets’ vocal training is evident and is exceptional.

The cast of “Priscilla” is huge, and many of the performers have played roles in theaters around the valley. Rarely, though, have so many of these actors worked together so seamlessly and with such passion. The ensemble dance scenes are a synchronized spectacle, no one seeming encumbered by extraordinary costumes that might include 2-foot-tall flower hats, cake dresses, beaks and wings, six-inch platform heels and translucent, lighted, twirling umbrellas. Kudos to costume designer Darby McCue, who created these amazing looks.

“Priscilla” is a massive production in all respects: 24 actors in 27 roles plus the ensemble; 450 bigger-than-life costume pieces, often requiring five-second costume changes; extreme wigs and makeup in every scene. The design and production team numbered 19 specialists, and eight musicians, unseen in the rehearsal room, who played every one of the 24 numbers that described the narrative arc of the production.

Shawn Ramagos is Camelot’s new creative director, and “Priscilla” is the first production that he has been fully involved in. While “Priscilla” made the 2018 Camelot lineup last year, it is the perfect debut vehicle to showcase Ramagos’ creativity. The Camelot board made sure he’d have the resources he needed to deliver this enormous, high-quality production.

“I designed the show to be extremely interesting visually both with the video effects and the scenery,” Ramagos said. “We had to have the bus; we had to have the costumes. I think it was the only way to do this show right.”

Casting was nearly complete before Ramagos was hired, but once on board, he had all the actors audition and made some changes at that time. There’s rigorous attention to detail in “Priscilla,” a level of technical control and production value that we rarely see off-Bardway.

Ramagos’ visual design gifts and his stage management experience show clearly in his direction of “Priscilla.” So early in the run, Ramagos will likely make some changes to the set and staging, there are a few lags in mics and lights, and the Camelot sound system still distracts on occasion.

There is a spectacular power, an abandon and freedom in Camelot’s production of “Priscilla — Queen of the Desert.” It’s a jaw-dropping, amazing show and a lot of fun.

The play has adult themes and sexually explicit language, gestures and props; a disco ball reflects strobe lights through the theater. “Priscilla” runs about two hours with a 20-minute intermission and continues through Aug. 5. For more information and tickets, see www.camelottheatre.org.

“Priscilla, Queen of the Desert” emerged in the mid-1990s, a rollicking and ribald film about two female impersonators and an aging transgender woman who were all suffering from a particular personal crisis, prompting the purchase of a tour bus lovingly christened “Priscilla.”

What followed was an ill-advised drag-show-cum-road-trip into the heart of the Northern Territory of Australia, a region peppered with conservative hamlets and jammed with reactionary puritans — think what might happen if an impromptu pride parade were mounted at the roughest bar in Prineville, and you get the idea. Standard lessons in underdog humor as a mechanism for survival, of bigotry and the triumph of the will, inevitably follow. The film was excellent, made all the more glorious by august thespian Terrance Stamp as the transgender Bernadette, soon-to-be “Matrix” bad-guy Hugo Weaving as Tick, and Guy Pearce as the vulgar but somehow lovable muscle-twink, Felicia.

I was skeptical that Camelot Theatre would have the creative capacity to pull off the musical version of this vaunted indie classic — elaborate exotic costuming being crucial, and a passable Australian dialect as an absolute necessity. Camelot has had a lot of trouble with good Commonwealth accents in the past, so I felt justified in my concern.

Well, I was wrong to worry. Not only do the three leading “ladies” in this show knock the ball(s) out of the park, but the costumes and production design signal that Camelot’s new artistic director, Shawn Ramos — who directed this show alone for the first time — seems ready and willing to raise the bar on quality production values at the theater.

From a sartorial standpoint, one wonders if Ramos has been recently underwritten by a new, particularly flush donor. There are 24 actors onstage and each scene gives way to more and more elaborate attire. Overall, the spectacle of the show (replete with a bus on stage that rotates regularly to show the campy horseplay within) is among the best that Camelot has produced in recent memory.

Scott Ford, as Bernadette, is a (relatively) low-key delight, with a capacity for catty comebacks at key moments where survival and boundary-setting are called for. Ford is no spring chicken, but he bounds and bounces through multiple spicy dance numbers, keeping up with the action in a compelling and endearing manner. The scene in which he confronts a prejudiced crone in an Outback bar is among the more memorable moments in the show.

As Tick, Zachary Horn is the glue holds this bitchy triumvirate together. His portrayal of a drag queen in her prime — who has a past with women, and a son to show for it — is well-rendered. He serves as a bridge of logic between the long-suffering Bernadette and the arrogant but easily affected Felicia.

On the whole, though, this show belongs to Evan Sheets, a young actor who made his bones in multiple productions at the Teen Musical Theater of Oregon and bursts onto the stage here as Felicia. Sheets is pretty terrific, elegantly camp where called for and erotically charged when necessary. He has a strong comedic gift, but the rubber-faced antics are more Buster Keaton than Jim Carrey — he manages to convey the terror and pathos of the little boy lost from under his abundant eyeliner and lip gloss.

Other longtime Camelot performers make the most of their supporting roles, with both Courtney Crawford and Grace Peets turning up in a group of three “Divas” with cleavage and shimmer to spare; Peets in particular is great at Marilyn Monroe-style flout and pout, making her performance ultra-memorable. Shannon Carter and Jessica Mengel are both relatively new to Camelot, but stand out in the ensemble scenes. Erny Rosales is delightful and alarming as a belligerent den mother under the daunting moniker of “Miss Understanding.” The rest of the cast do well, on the whole.

The company has been at its best when it busts out these kind of high-energy, feather-boa kickathons, as I noted in my review of “La Cage aux Folles” in 2016. Priscilla is a great deal of fun and pokes fun at all the stickiest prejudices. It’s a fun and flamboyant night on the town that you probably won’t want to miss. 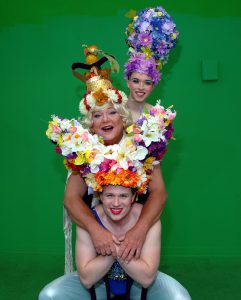 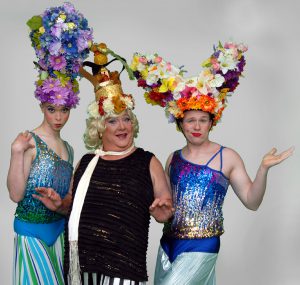 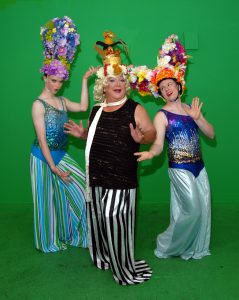 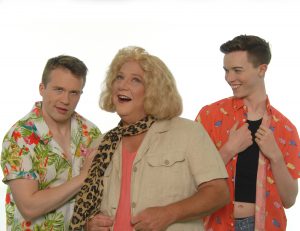 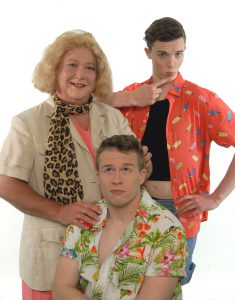 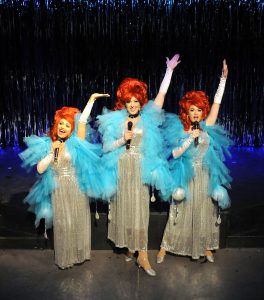 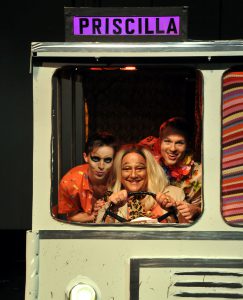 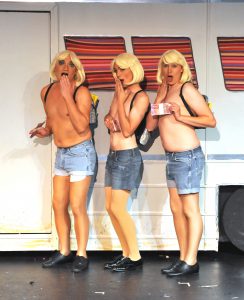 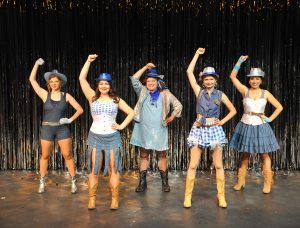 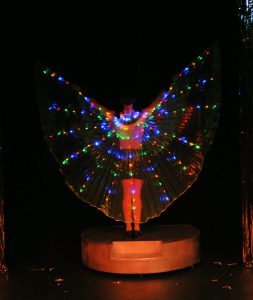 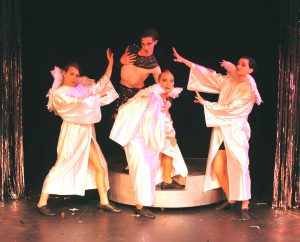 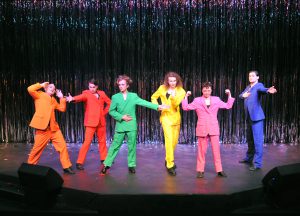 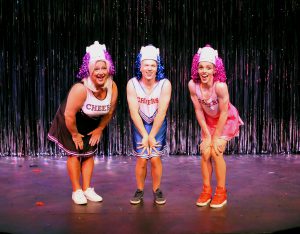 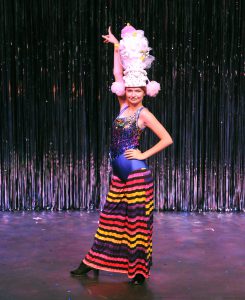 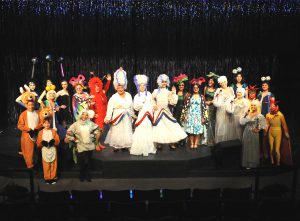