THE BEST LITTLE WHOREHOUSE IN TEXAS 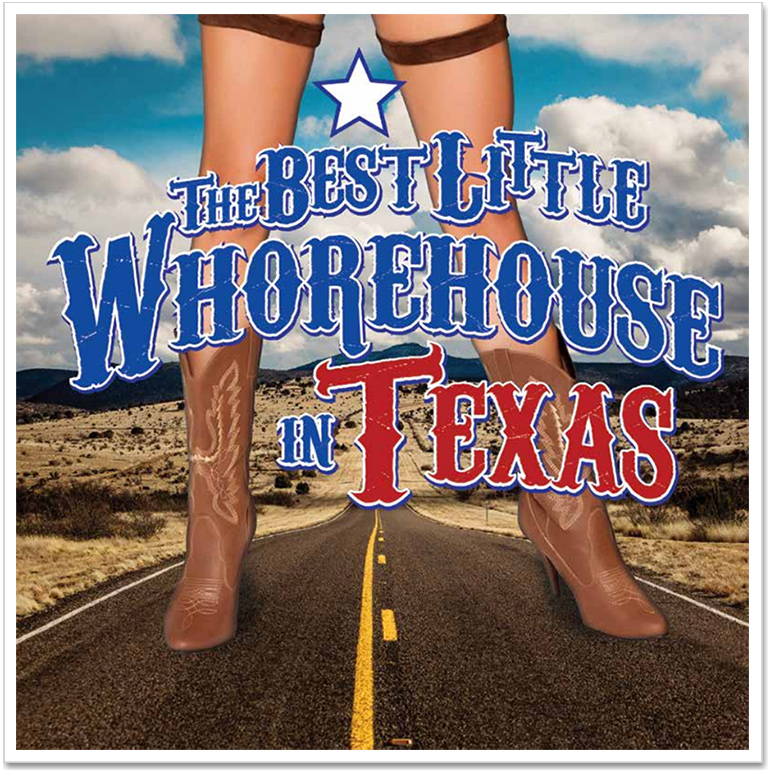 The Chicken Ranch is a famous Texas cathouse known since the 1850s where good ol' gals with hearts of gold retail good will (and other comforts) under the watchful eye of madam Miss Mona Stangley. All heck breaks loose when a crusading TV reporter, Melvin P. Thorpe, decides to turn his spotlight and righteous indignation on the operation, which has been a home away from home for generations of leading citizens. This rollicking hootenanny of a musical is based on the true story of a legendary Texas brothel and features Country- Western/Broadway tunes including "Twenty Fans Were Turning" and "Hard Candy Christmas." Winner of Drama Desk Awards for Best Direction and Outstanding Music and Lyrics as well as two Tony Awards, The Best Little Whorehouse in Texas is a hoot and a hollerin' good time!

Mail Tribune Review
Mail Tribune Review
Big hair, baubles and a Texas brothel.
By Maureen Flanagan Battistella for the Mail Tribune September 11, 2018
Get ready for some foot-stomping cowboys and bustin’-out beauties at “The Best Little Whorehouse in Texas,” the ‘80s hit show that opened last week at Camelot Theatre in Talent.

After 150 profitable years, a small-town house of ill repute is outed by an investigative TV reporter, and a kind-hearted Texas madame has to close shop when her high-profile customers decline to support her.

“The Best Little Whorehouse in Texas” is a fictionalized account of a real brothel’s public exposure. It was first a 1978 Broadway musical and then a hit film in 1982 starring Burt Reynolds and Dolly Parton.

“The Best Little Whorehouse in Texas” has a bit of romance, a couple of two-faced politicians, lovely ladies of the night, sex-crazed Aggies and a whole passel of protesters. In the end, the Chicken Ranch is busted, the ladies exit to who knows where, a singular love interest goes unexpressed, johns go unpunished and unashamed, and the leads, Cyd Charise Ropp as Miss Mona and Lanny Horn as Sheriff Ed Earl, are wealthy and just move along.

Ropp is well cast as Miss Mona, standing proud, protecting her girls and proclaiming her independence. Ropp’s spare frame and big hair are great fits for the role and the baubles, boots and buckskin of her costuming. Horn, as her protector and love interest, can pshaw through that big mustache and sashay bowlegged with the best of those Texan gents.

Chicken Ranch women express freedom of choice and independence, comfortable under the wing of Miss Mona, who trains, protects and nurtures her girls. They’ve left their dreams behind — and sometimes abuse — to work at the brothel. Taelor Viera in the role of Shy is transformed from a naive but determined youth and blooms under Miss Mona’s attention and coaching.

Representing women who fear risk and prefer a staid, predictable existence is cafe waitress Melanie Marie as Doatsey May. Marie nicely conveys that fearful, ambiguous longing for freedom and adventure in dress, attitude and song. Doatsey May’s covert theft from Sheriff Ed Earl’s office is mysterious, a red herring that seems to go nowhere in the narrative.

The ensemble scenes are memorable and take the form of chair dances, locker room wet dreams and pseudo-religious news TV encounters. The knowing looks, satin slips and inviting sexuality of the girls parading their wares are entertaining and contrast with the wild anticipation of Aggie boys who can’t wait to get to the ranch. The Aggies, led by the athletic Eoghan McDowell, flex their hips and fist bump in foot stompin’ anticipation of release. McDowell moves so fast in this scene that he’s breathless and holds his chest as he sings the final number.

Perhaps the most comical and frightening character is Maxwell Bruhn as Melvin P. Thorpe, the smarmy TV newscaster who takes it upon himself and his choir to close down Miss Mona’s Chicken Ranch. Awkwardly dressed in a red, sequined jacket with holstered guns that dangle dangerously where they shouldn’t, Bruhn as Thorpe leads the red-robed choir in horrified protest.

Camelot’s set design is beautifully done and is horizontally layered, with the action taking place on the floor, in front of the curtain and on the stage, giving performers maximum space without the need to move major set pieces. With just two moveable staircases leading to the ladies’ red-curtained rooms above, a self-contained room on wheels and the stage curtain, the set is efficiently and quickly transformed from brothel, to locker room, to Austin’s rotunda, street scenes and Ed Earl’s office.

Also of interest is the live orchestra, not visible to the audience. Six musicians sit, not in a pit in the front of the stage, but behind the scenes in the Green Room.

“It is a little bit challenging, but we have monitors back there and we have headsets,” says Don Hopkinson Jr., Camelot’s conductor for this show and incoming musical director. “So we can hear everything that’s happening in the theater, and I have visual if I have to take anything off the actors. It helps to have amazing people to work with, because you know when that music starts, the actors will be there.”

In the days before the AIDS epidemic, bad breath and the clap would have been Miss Mona’s biggest fears. In retrospect, it somehow seems uncomfortable to popularize sex for hire sweetened up with a message of women’s liberation and a Texas twang even if “kissing” wasn’t allowed. Put those reservations away for a time and enjoy “The Best Little Whorehouse in Texas.”

The play runs through Sept. 23. Tickets cost $20 to $36. The opening-night production ran more than 2 hours plus a 15-minute intermission. Expect adult sexuality and language and gunshot sound effects. See www.camelottheatre.org or call 541-535-5250 for tickets and information.