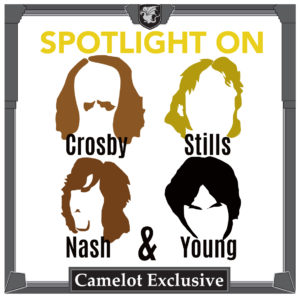 With two cats in the yard,

Life used to be so hard,

Now everything is easy 'cause of you…”

Dave Bernard & The East Main Band will once again rock out the Camelot Theatre with CSN&Y classics including, “Suite: Judy Blue Eyes,” “Marrakesh Express,” “Teach Your Children,” “Our House,” “Just a Song Before I Go,” “Southern Cross” and many more. If you’ve seen this group perform before you’ll know to get tickets early – it will sell out quickly!